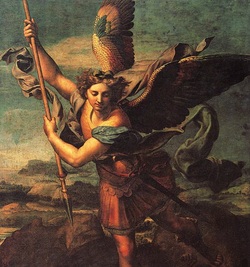 This is the Gospel reading from my church for last Sunday and this week. It's interesting to consider these readings, and see how they stand in relationship to all that happens in the course of the week. Sunday was also the first Sunday of Michaelmas, the season of Michael the Archangel. Who knows about these things anymore, really ? And what do they really mean ?


Parable of the Wedding Banquet

1 Jesus spoke to them again in parables, saying : 2 “The kingdom of heaven is like a king who prepared a wedding banquet for his son. 3 He sent his servants to those who had been invited to the banquet to tell them to come, but they refused to come.

4 “Then he sent some more servants and said, ‘Tell those who have been invited that I have prepared my dinner: My oxen and fattened cattle have been butchered, and everything is ready. Come to the wedding banquet.’

5 “But they paid no attention and went off—one to his field, another to his business. 6 The rest seized his servants, mistreated them and killed them. 7 The king was enraged. He sent his army and destroyed those murderers and burned their city.

8 “Then he said to his servants, ‘The wedding banquet is ready, but those I invited did not deserve to come. 9 So go to the street corners and invite to the banquet anyone you find.’ 10 So the servants went out into the streets and gathered all the people they could find, the bad as well as the good, and the wedding hall was filled with guests.

11 “But when the king came in to see the guests, he noticed a man there who was not wearing wedding clothes. 12 He asked, ‘How did you get in here without wedding clothes, friend?’ The man was speechless.

13 “Then the king told the attendants, ‘Tie him hand and foot, and throw him outside, into the darkness, where there will be weeping and gnashing of teeth.’ 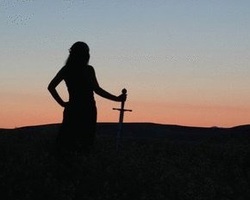 The most familiar image is of Michael fighting the Dragon. There is also much, much more to be learned about Michael, but it's certainly worth it to start with that image. The picture, we notice, is often of Michael fighting the Dragon "in heaven" - that's in the text from Apocalypse which inspired all the paintings, sculptures, etc. It's a very fruitful thing to live with all these components - for a period of days or weeks even : the Dragon, Michael the fighter, "in heaven". What do all those pictures mean ? What scenario is that describing ; what are the correspondences in the external world we know. How does this play out in history - past, present, future ? And how does it play out in the INTERNAL world we know. These are the things we do very well to occupy ourselves with during this Michaelmas time of the year. For today I'd like to contribute a verse I feel has to do with this "occupying ourselves", exactly. It's the Third Step Prayer from Alcoholics Anonymous, and I think it fits perfectly to Michaelmas : "Higher Power I offer myself to You, to build with me and to do with me as You will. Relieve me of the bondage of self that I may better do Your Will ; take away my difficulties that victory over them may bear witness to those You would help, of Your Power, your Love, and your Way of Life ; may I do your Will always." I've capitalized a few words as food for thought - but I think this is quite a Michaelic prayer. Thanks to Ruta Hallam for your photo !
​ 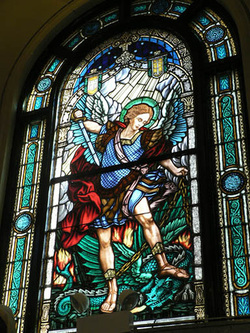 Finally, my brethren, be strong in the Lord, and in the power of his might. 11Put on the whole armour of God, that ye may be able to stand against the wiles of the devil. 12For we wrestle not against flesh and blood, but against principalities, against powers, against the rulers of the darkness of this world, against spiritual wickedness in high [places]. 13Wherefore take unto you the whole armour of God, that ye may be able to withstand in the evil day, and having done all, to stand. 14Stand therefore, having your loins girt about with truth, and having on the breastplate of righteousness; 15And your feet shod with the preparation of the gospel of peace; 16Above all, taking the shield of faith, wherewith ye shall be able to quench all the fiery darts of the wicked. 17And take the helmet of salvation, and the sword of the Spirit, which is the word of God : 18Praying always with all prayer and supplication in the Spirit, and watching thereunto with all perseverance and supplication for all saints; 19And for me, that utterance may be given unto me, that I may open my mouth boldly, to make known the mystery of the gospel, 20For which I am an ambassador in bonds: that therein I may speak boldly, as I ought to speak.

12 And there appeared a great wonder in heaven; a woman clothed with the sun, and the moon under her feet, and upon her head a crown of twelve stars:

2 And she being with child cried, travailing in birth, and pained to be delivered.

3 And there appeared another wonder in heaven; and behold a great red dragon, having seven heads and ten horns, and seven crowns upon his heads.

4 And his tail drew the third part of the stars of heaven, and did cast them to the earth: and the dragon stood before the woman which was ready to be delivered, for to devour her child as soon as it was born.

5 And she brought forth a man child, who was to rule all nations with a rod of iron: and her child was caught up unto God, and to his throne.

6 And the woman fled into the wilderness, where she hath a place prepared of God, that they should feed her there a thousand two hundred and threescore days.

8 And prevailed not; neither was their place found any more in heaven.

9 And the great dragon was cast out, that old serpent, called the Devil, and Satan, which deceiveth the whole world: he was cast out into the earth, and his angels were cast out with him.

10 And I heard a loud voice saying in heaven, Now is come salvation, and strength, and the kingdom of our God, and the power of his Christ: for the accuser of our brethren is cast down, which accused them before our God day and night.

11 And they overcame him by the blood of the Lamb, and by the word of their testimony; and they loved not their lives unto the death.

12 Therefore rejoice, ye heavens, and ye that dwell in them. Woe to the inhabiters of the earth and of the sea! for the devil is come down unto you, having great wrath, because he knoweth that he hath but a short time.

13 And when the dragon saw that he was cast unto the earth, he persecuted the woman which brought forth the man child.

14 And to the woman were given two wings of a great eagle, that she might fly into the wilderness, into her place, where she is nourished for a time, and times, and half a time, from the face of the serpent.

15 And the serpent cast out of his mouth water as a flood after the woman, that he might cause her to be carried away of the flood.

16 And the earth helped the woman, and the earth opened her mouth, and swallowed up the flood which the dragon cast out of his mouth.

17 And the dragon was wroth with the woman, and went to make war with the remnant of her seed, which keep the commandments of God, and have the testimony of Jesus Christ.